​We will open as soon as it is safe to do so.

​Broadland Aikido Club in Lowestoft, Suffolk has 80 @ 2m x 1m x 40mm thick, green and red Gee mats of various conditions from new for sale. These mats can be used for training in martial arts such as Aikido, Judo, Jiu Jitsu, Karate, also gymnastics. New these mats cost about £105 each.
Cost as follows:
Like new £60 each
Slightly used £40 each
Well used £20 each

Fitness and Weapons training to start at Broadland Aikido Club

It is with much pleasure we can announce the return of training on Sunday 8th November 2020. Classes will be from 9 - 11am at our new venue at the following address:

There will be rules we will have to follow:
Before and after training sanitising of surfaces will take place. Hand wipes will be available.

We look forward very much to our return to training and seeing you all.

Get fit with Aikido at our purpose built dojo (practice hall)

After 20 years in the making a book of interviews with senseis Haydn Foster, William Smith, Kenneth Cottier, Tom Moss, Gwynne Jones and Pat Stratford. Read about their personal side, their life and work before starting to train in Aikido, why and how they started training. What it was like in the early days and the changes they have seen. How they would like to see their association and Aikido in the future. Each interview reveals the personal side of these pioneer senseis that were at the beginning of British Aikido, they were there making history.

​SEE BELOW OUR PAST EVENTS 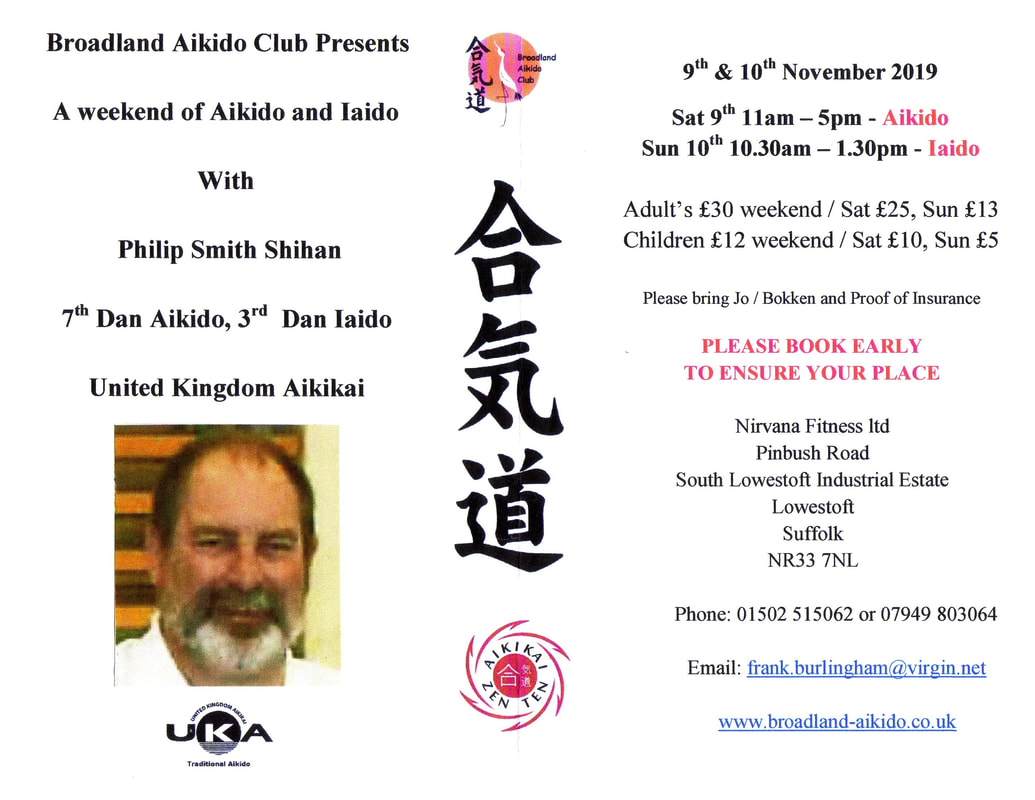 As most of you may know the first International Friendship Seminar took place in 2010 at Broadland Aikido Club dojo in Lowestoft when Haydn Foster sensei Institute of Aikido (U.K.), Philip Lee sensei (Singapore) and Osamu Obata sensei (Canada) agreed to teach together in friendship. Sadly Foster sensei passed away the following year. Since then each year it has rotated being held in the U.K., Singapore and Canada. This year on weekend of 6th – 8th April saw the 9th IFS take place in Singapore along with Philip Lee Shihan association, Aikido Shinju-kai celebrating its 30th year.

It was without a doubt the largest Aikido seminar and celebration I have ever attended in my 46 years of training and study of Aikido, when I say largest I mean it was a very big event as you can see below  in the attached photo.

At one point for the group photograph there was a total which included the children, in excess of 870 on the tatami from 26 countries.
Planning started in August 2016, the dojo was a fully air conditioned 20 badminton courts wide sports hall that can hold 2000 participants and spectators, over 1000 tatami were laid

The Gala dinner was held on the Sunday evening and was attended by over 860.

The event was held at Ormiston Denes Academy. Sports Centre, Lowestoft, NR32 4AH, proved to be a big success and was attended by around 80 plus students from around the U.K. and the world. Also in attendance were two high ranking 7th Dan senseis Shane Riley sensei and Philip Smith sensei who head up their own associations in the U.K. Attendees came from Belgium, Canada, Malaysia, Russia, Singapore, Sweden, also three students drove from Edinburgh Scotland in order to attend.
This event which started in Lowestoft in 2010 initially rotated around Lowestoft, Toronto and Singapore; recently Brussels has also become a venue. Next year Singapore will host the 9th International Friendship Seminar along with celebrating 30 years of Aikido Shinju-Kai.
The event was open to the public to view free of charge. Broadland Aikido club trains Tuesday & Thursday evening and Sunday morning at Nirvana Fitness Centre, Pinbush Rd, and welcomes new members at any time, please bring this article for 3 FREE lessons or contact Frank Burlingham on 01502 515062 or email: frank.burlingham@virgin.net Alternatively please see our website at: www.broadland-aikido.co.uk.

Frank Sensei was invited to teach by Ray Eder sensei at Kyu Shin Do dojo. On the way to and from New Zealand Frank stopped off at Singapore to visit his good friend Philip Lee Shihan. While n New Zealan Frank managed to ctch up with David and Hisae Lynch, David Lynch introduced Aikido into New Zealand.

In July 2016 after the 7th International Friendship Seminar in Brussels, Osamu Obata Shihan 7th Dan so Hombu from the Japanese Canadian Cultural Centre Aikikai in Toronto Canada (JCCC), visited Broadland Aikido Club . Thank you sensei for spending time with us and teaching us. 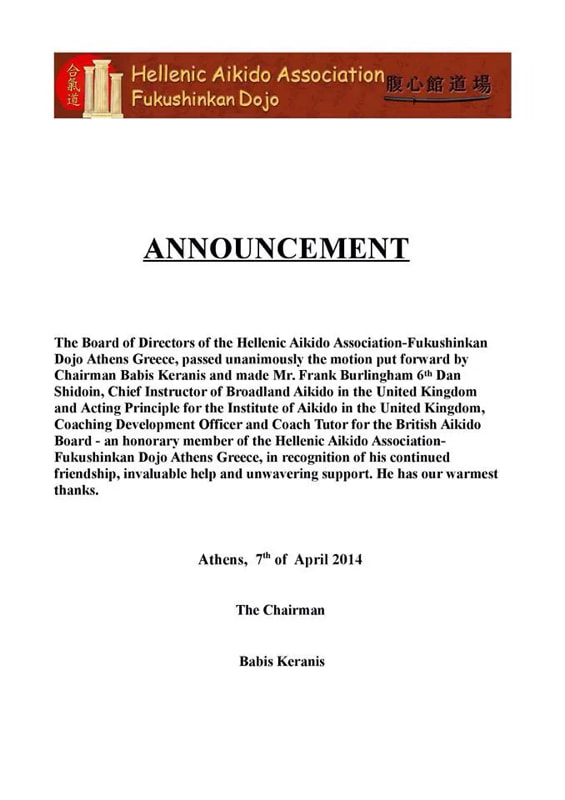