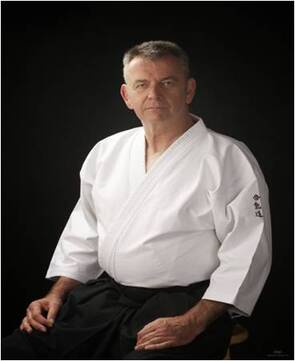 Frank Burlingham is the Chief Instructor of Broadland Aikido Club and principal of Aikikai Zen Ten. He is the Coaching Development Officer and Coach Tutor for the British Aikido Board and holds the BAB Coach Level 3. Frank formally worked as a college lecturer in Performing Arts Technical and Wood Trades

In the mid 1970s Frank moved to London where he met and studied under H. Foster Sensei Institute of Aikido. In 1978 he moved to Toronto Canada and studied for many years at the Japanese Canadian Cultural Centre (JCCC) under Osamu Obata Shihan.

Upon Franks return to the UK in 1985 he met and studied under William Smith Shihan United Kingdom Aikikai and Tom Moss Sensei Yama Arashi. Frank became chief instructor of Broadland Aikido Club in 1987.

In 1999 he brought together for the 1st time the heads of three associations (H Foster IOA, W Smith UKA & T Moss Yama Arashi) to teach in what was then known as the Big 3 Course. This course evolved into the annual Lowestoft Course. In 2010 Frank brought together Sensei’s H. Foster, Osamu Obata Canada and Philip Lee Singapore for the first International Friendship Seminar (IFS). This seminar now rotates annually around the U.K., Singapore, Canada and Belgium.

Frank has travelled extensively around the world studying and teaching Aikido, the highlight of this was being given the honour of practising at the Hombu Dojo and Meiji Shrine in Tokyo, and taking part in a demonstration at the Budokan stadium in Tokyo.
​
Frank has been made an honorary member of White Rose Aikikai U.K., the Hellenic Aikido Association, Athens and was made a lifelong member of the Institute of Aikido.
​
In August 2016 Frank resigned from the Institute of Aikido and with the encouragement and support of many dojos and students formed Aikikai Zen Ten. 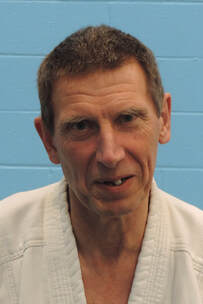 ​Vince started Aikido in 1982 and is a senior member of Aikikai Zen Ten. In 2013 at the International Friendship Seminar he was graded to the rank of 5th Dan. He has been teaching Aikido for many years and teaches the Sunday morning class at Broadland Aikido Club.

Vince holds a First Aid Certificate along with Coach Level 1.

Vince has trained in Canada at the Japanese Canadian Cultural Centre in Toronto under Osamu Obata Shihan 7th Dan.
In order to widen his Aikido knowledge and understanding, Vince currently travels around the U.K. and abroad visiting clubs and attending seminars.
​
He regularly travels to and teaches at the Hellenic Aikido Association in Athens Greece, he also teaches on the annual Aikikai Zen Ten course and weapons course held in Somerset. 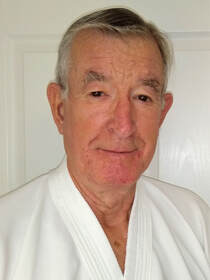 Michael started Aikido in 1977 at the age of 34 at the Phoenix Aikido Club, Broad Lane, Coventry. He was a relatively late starter after being a promising cyclist in his teenage years. He had an horrific motorbike accident when he was 19 which resulted in amputation of his left leg just below the knee.

Sensei Tom Moss was keen to work with Michael to find ways in which he could fully participate in Aikido. He was graded to 1st Dan in 1981 by Sensei Tony Thielemans in Brussels, Belgium, head of the Yamarashi Budokan, Europe.  The grading to 2nd Dan came in 1988. He taught Aikido for 14 years at the Phoenix Aikido Club and attended many courses led by Sensei from the Hombu.

After a 9 year break, when he lived in various parts of the UK, Michael returned to Aikido in 2003 after he moved to Lowestoft. He was graded 3rd Dan in 2006 by Sensei Foster and Sensei Frank Burlingham of the Institute of Aikido. This was followed by the award of 4th Dan in 2012.

He holds a level 1 Coaching Certificate awarded by the British Aikido Board. 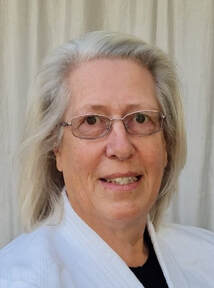 Julie Partridge began her aikido training at the age of 13 under instructor Htun Han (Burmese Sensei) in Lowestoft. She continued at Sussex University under Ron Catteral (Sensei, BAF) and became instructor there where she led practice regularly. She also travelled to London many times each week to train under Mr Foster (Sensei IOA) and Mick Holloway (Sensei BAF).

After graduation, Julie trained in London under Minoru Kantesuka (Sensei BAF) and gained her 1st Dan with Masatake Fujita (Sensei, Hombu). She diversified further to train under Katsuaki Assai (Sensei, IAF) in Dusseldorf.  In subsequent years she opened dojos in Southend and in Cote d’Ivoire.

After a hiatus in training to pursue a career in teaching mathematics, and to raise a family, Julie resumed training in London under Chris Diacopoulos (Sensei, Kobayashi Aikikai) and then Bjorn Saw (Sensei Iwama) who encouraged her to take her 2nd Dan, examined by Bjorn Erik Olsen (Sensei, Norway Aikikai). She returned to Suffolk in 2019 and joined Broadland Aikido Club.